Or how, one day, two entrepreneurs had the crazy idea of creating a vending machine to sell nail polish rather than, say, cans of soda or cereal bars…
Boris and Lilian meet for the first time in Paris in 2004. The former has a background in the cosmetics industry (Black Up, By Terry, Deborah group) and the latter is a self-taught all rounder who has worked in communication and music. 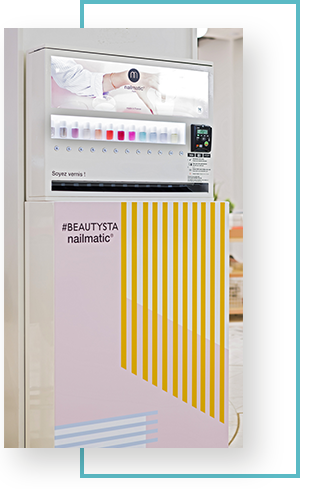 An idea this good must have already occurred to someone, surely? You can imagine this type of machine in the fashionable neighbourhoods of Shibuya in Japan or in a giant mall in Abu Dabi. But, no, nailmatic is first on the scene. !

Boris and Lilian’s vision is clear: a polish is a fashion accessory, designed to complement a look. It must remain affordable to be collectible. Nailistas should be able to spoil themselves in a feel good ritual. The act of buying must regain a lost sacred aura? Here we are...

Garance Doré, one of the most influential fashion bloggers, was enthusiastic when she found one of our first machines in Paris: “The most awesome thing I’ve ever bought in a vending machine. Paris, you are so lucky.”

Following on this beauty geek inspiration, nailmatic has developed a vending machine especially for kids. Tirette reminds parents of the vintage prize machines at funfairs, and that was something.
The cherry on the cake? A mini version of our Woman machine made with 3D printed material, a high tech beauty gem now available for smaller boutiques and concept stores.